BY MY BIG FAT PRESS

According to local reports, the newly renovated pub and eatery had become embroiled in a deadly race for the most outrageous bloody Mary special.  Fueled by a recent introduction of a fifty pound cocktail boasting celery, pickle, ten year aged cheddar, and a fully functional Habitrail by a neighboring eatery,  owner Norm Grossberg may have gone too far.  While most customers were delighted to find actual shrunken human heads adorning the pub’s famous breakfast cocktail, (Norm makes his own recipe from scratch daily and refuses to share its secret!), one customer thought things had gone too far.

Cathy Evans, a local paralegal and breakfast cocktail enthusiast was aghast. “When Norm told me the new Bloody Mary cost $10.00 I was disgusted. Sure, they serve it with a full pint of beer, but ten is just too much.  Maybe I was a little cranky when the drink arrived, but I thought serving a human head was just in bad taste.”  Evans acknowledged that the drink itself was solid- spicy enough, but not over the top.” I have some legal experience and I suspected that there may be a code violation in the way the drink was served, so I called the health department.”

“I’d never seen a bloody Mary that cost over seven dollars- not ever.  The human head, while unique and certainly novel, sent up a red flag for me.” Sheboygan County Inspector

Sheboygan County Food Service Inspector Doug Hatfield was shocked when he was served the, “Head of the Class Bloody Mary.”

“I’d never seen a bloody Mary that cost over seven dollars- not ever.  The human head, while unique and certainly novel, sent up a red flag for me.”  After finishing the drink, Hatfield asked to inspect the food preparation area.  “There were towels hanging over preparation areas, tripping hazards in walkways, and dismembered bodies.”

“The race for the best and most outrageous bloody Mary must stop.  It’s a game of mutually assured destruction in which prices are driven up while the quality of our brunch cocktails is often ignored in favor of what I call, “glam drinks.”  Our thoughts and prayers are with the families of the employees displaced by this morning’s closure, as well as those of the slain garnish…” 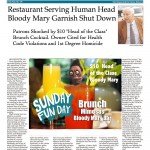