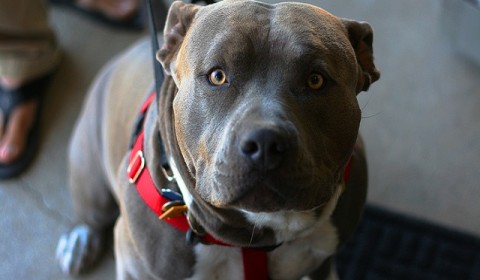 An Inver Grove Heights man is listed in stable condition after an assault by the owner of a pitbull terrier named Sweet Pea.
Frederick Mantooth, 29, reportedly infuriated the dogs owner by failing to acknowledge its gentle demeanor and hilarious expression in a series of Facebook and Instagram photos posted on Monday.
His alleged attacker, Karl Wantenstien, 43, complained to authorities that Mantooth, like so many others, was guilty of profiling Sweet Pea.
“Sweet Pea wouldn’t hurt a flea. It’s not fair that jerks like Mantooth won’t give her a fair shake. I posted over a dozen photos of her on Facebook- some on Instagram too.  I know he saw most of them but didn’t hit the like button once- not once!!”

“It’s important to remember after an attack

safe individuals and needn’t be feared.”

Attacks like these are becoming more common as organizations like Pitbull Rescue USA®, and regional animal shelters work to integrate displaced pitbulls back into communities.
“It’s important to remember after an attack like this that pet owners are generally safe individuals and needn’t be feared. Behavior like this is usually the result of their environment,” says Jeff Maddingly of the South Metro Animal Shelter.
Carver County does not generally destroy owners after attacks like these. Wantenstien is being held at a local hospital for observation pending rabies testing.
Read More >>>>